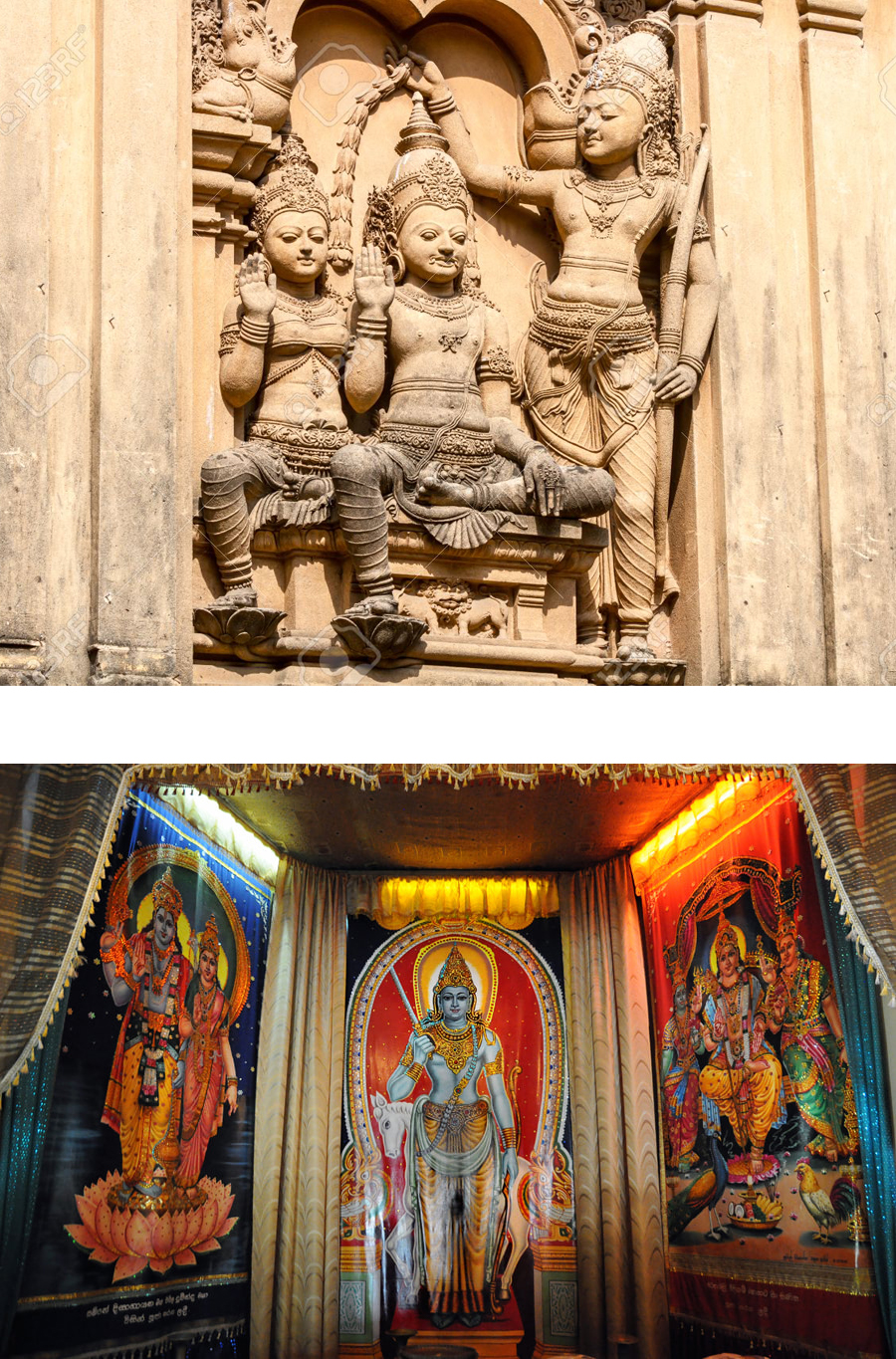 Even though Kelaniya is very important Buddhist Temple in Sri Lanka, there is a direct link between Ramayana tour Sri Lanka and Kelaniya Buddhist Temple. Ramayana states that after the death of King Ravana , King Vibhishana was crowned by Lakshmana . So Kelaniya is the place which had been ruled by Vibhishana. The reason Lakshmana crowned Vibhishana in Kelaniya was because Rama had to return to India as he had to continue his self-exile of 14 years to honour the commitment to his father, King Dasarath of Ayodhya. Therefore, Kelaniya Buddhist Temple also considered as important site of Ramayana tour of Sri Lanka. King Vibhishana was considered a fair king, as he supported Rama against his own brother’s injustice.

Many devotees that visit king Vibhishana ’s shrine pray to him asking his intervention to a fair recourse to their problems even today. The Kelani River is mentioned in the Ramayana by Valmiki as Vibhishana ’s palace was said to be on the banks of this river. King Vibhishana is still considered as one of the 4 guardian deities of Sri Lanka, there can be seen many temples for King Vibhishana god (Vibhishana Deviyo) throughout Lanka. It is a fact that there is no temple for King Ravana where as many exist for King Vibhishana . This goes on to prove that his stand towards Dharma and justice made him a god is Sri Lanka. Also Vibhishana is venerated by Sinhalese Buddhists as a God, they believe him to be one of the main protectors of the island, especially in its western territories. In the temple of Kelaniya a shrine of Vibhishana can be noticed even at the present. Murals of crowning of king Vibhishana is also there giving proof to the epic story of Ramayana and its importance in Sri Lanka. 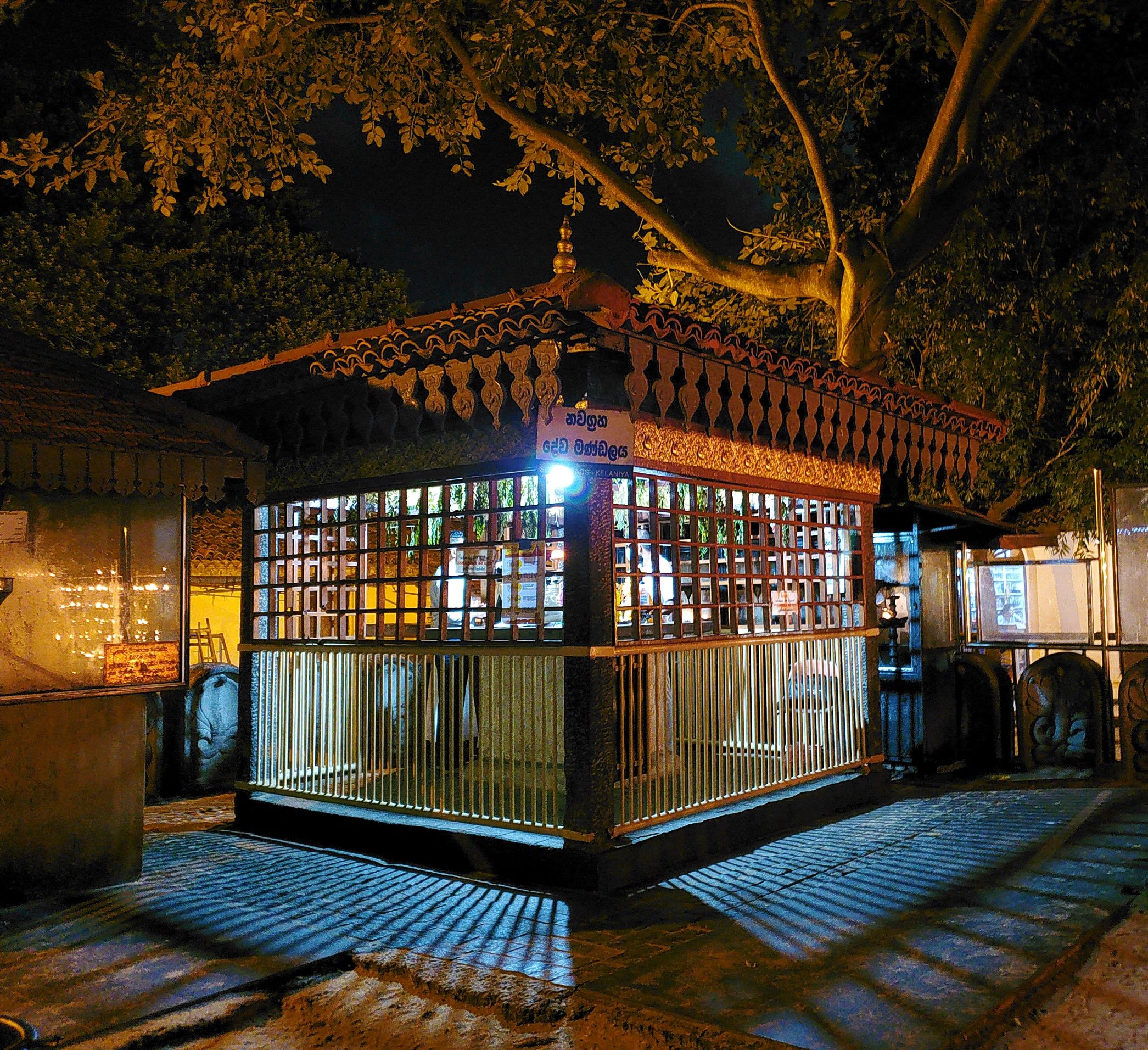 According to the Eastern astrology people believe that Navagraha deities could affect our lives in various ways. You can see a newly added dewala dedicated to these deities in Kelaniya Raja Maha Viharaya.

A dewala dedicated for these deities is a latest addition to the temple premises and it is situated behind the Bo tree. Depicting the 9 deities; Ravi, Chandra, Kuja, Buddha, Guru, Shani, Rahu, Kethu and Sandu, 9 stone statues have been put up there in the dewala. These statues are sculpted by traditional Indian artists.

Daily pooja sessions are performed here in the devala and devotees attend and receive blessings. 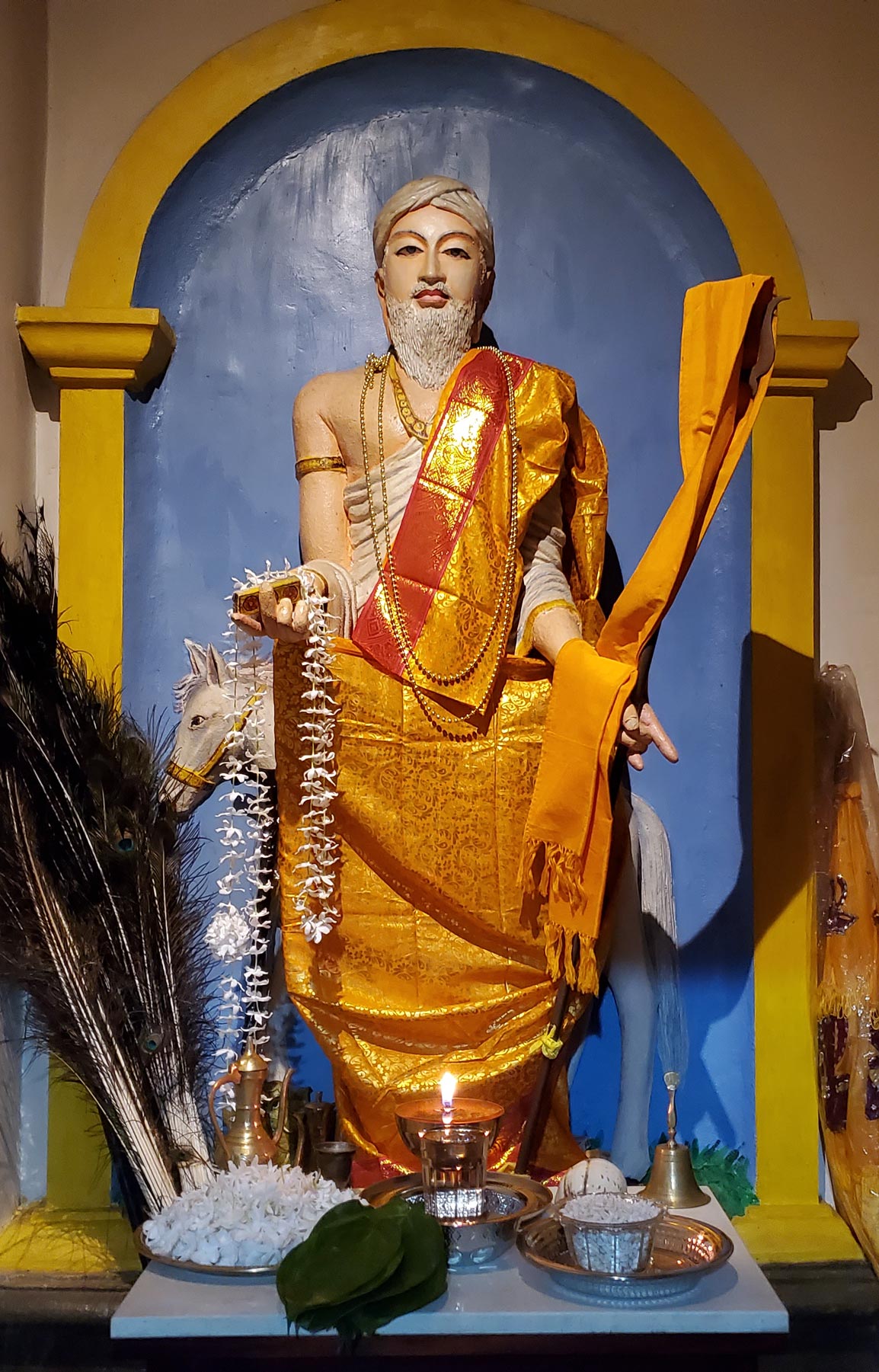 There is a Gambhara Dewala devoted to the God Suniyam in Kelaniya Raja Maha Viharaya near the Vibhishana dewa mandira. It’s a new addition to the temple premises. Daily thevava session is performed in this dewala and many devotees come to get the blessings.

The mahāvamsa records that cobras (nāgayā) were a human division who existed in the lands of Ceylon (modern Sri Lanka). Accordingly, the ancient Naga king of the Kelaniya region of the Naga tribe was known as Maniakkhika.

According to the historical records Maniakkhika, been the uncle of the two warring Naga chieftains namely Chulodara and Mahodara had visited Nagadeepa. There he took refuge in the triple gem (Buddha, Dhamma and Sangha), pleased with the wonderful words of the Buddha who visited Sri Lanka for the second time in the fifth year of his Buddhahood, in compassionate towards the Nāgas to settle their dispute.

Moreover the Mahavamsa states that the Naga king Maniakkhika of Kelaniya had invited the Supreme Buddha to visit the part of the country where he held sway. Since that idea was not fulfilled, three years later king Maniakkhika Naga went back to Dambadiva and invited the Buddha to visit his abode, Kelaniya. Accordingly in the eighth year following his attainment of enlightenment, the Buddha accompanied by five hundred Arahant monks proceeded to king Maniakkhikas’ dwelling city of Kelaniya in the west of Sri Lanka on a Vesak full moon poya day. It was marked as the third visit of the Supreme Buddha to Sri Lanka.

At that time the Supreme Buddha stayed there temporarily together with the monks. The Naga King and his followers treated the Buddha and his disciples with heavenly great delight. In addition the supreme Buddha had preached Dhamma to the assembled nagas and King Sumana Saman sitting on a gem pavilion which had been decked with gems. In fact this sacred gem pavilion is treasured in the relics chamber of the Kelaniya pagoda.

The statue of the noble god, Maniakkhika is erected as a living form in front of the pagoda of Kelaniya Raja Maha Viharaya. It is being worshiped and paid homage by the devotees for the great service that was rendered by him towards Buddhism.

The following stanza is chanted to worship the divine king Maniakkhika Naga.

Princess Devi was the only daughter of King Kelanitissa who ruled Kelanipura (205 B.C - 161 B.C ). As it’s recorded in the history king Kavantissa drowned an Arahant monk in a large boiling pot filled with hot oil. This cruel deed angered the gods and they made the ocean rush into the island and flood all the lands. Astrologers declared that in order to prevent this disaster of the raging waves, a member of the royal family would have to be sacrificed to the sea.
Hearing this the young princess Devi bravely came forward to save the people of the country from the sin committed by her father.

Furthermore the history records that in the midst of the sighs of all the members of the royal family and citizens this heroic princess was put into a beautifully decorated ship and floated into the sea with a saying which reads “ This is the daughter of King Kelanitissa”.
It is said that as soon as Princess Devi was sent off, to everyone’s surprise the raging waves of the sea suddenly turned calm again and the water was reduced.

The Thupavamsa ( Sri Lankan historical chronicle of the stupa and religious text in Pali language) states that the ship which carried this noble brave princess had safely reached the Kirinda area in the southern part of the country which was known as Rohana (modern Ruhuna) and it was ruled by king Kavantissa. Further the Thupavamsa states that the fishermen who spotted this shop had rushed to the palace and informed the king about this.

Upon hearing the news King Kavantissa took Princess Devi to the palace in a grand procession. The king after hearing her story was so impressed by her bravery and good deeds hence decided to marry her. According to the historical records there was a temple (Lanka Vihara) where Princess Devi landed and then onwards she came to be known as Viharamahadevi.

This royal couple had two sons namely, Prince Dutugemunu and Prince Saddhā Tissa. The great contributions of them towards our country, nation and the religion is clearly recorded in the Sri Lankan book of history.

The white sculpture which is erected as a tribute on the verge of the Kelani pagoda in the Kelaniya Raja Maha Viharaya to the goddess Viharamahadevi is worshiped and honored by all pilgrims who visit the temple.

Furthermore the Mahāvamsa had indicated that the parents of the future Maitreya Bodhisatta would be king Kavantissa and Queen Viharamahadevi. In addition it also states that the foremost chief disciple and the second chief disciple are going to be Prince Dutugemunu and Prince Saddhatissa accordingly.