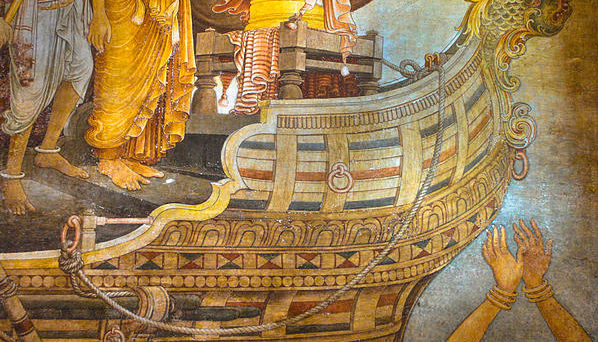 Since the Buddha’s visit, Kelaniya received its hallowed status as a sacred place of Buddhist worship. After the formal introduction of Buddhism in Sri Lanka by Arahath Mahinda about in 246B.C.; during the reign of the king Devanampiyatissa, Kelaniya came into prominence once again. The King’s brother, Uttiya is said to have reconstructed the Kelani Chetiya and reconstructed the monastery in addition. After him Kelaniya seems to have become a separate Kingdome. His nephew who succeeded him built a magnificent five-storey building and a shrine room, to add to the beauty of the place.

He was succeeded by Kelani Tissa, the grandson of Uttiya. During his reign Kelaniya seems to have experience the most disastrous floods of all time. The events that led to these floods as recorded in the chronicles provide some interesting reading.

The story goes that the King’s brother has secretly being in love with the queen. Suspecting that the king had come to know this, he fled from court to avoid the wrath of his brother. The prince, who lost all contacts with the queen adopted the ruse to correspond with her. One day when it was the customary alms giving day at the palace the prince arrange his trusted servant to enter the palace in the guise of a novice monk and drop a letter for the queen. This was done, but the rustle of the letter attracted the king’s attention and he picked it up. Seeing the writing to be similar to that of the Maha Thera of the temple, the king in his blind rage ordered the innocent monk to be boiled to death in a cauldron of boiling oil.

In his all-consuming fury, the king forgot the fact that, Uttiya, having been a pupil of the Maha Thera could write in the similar hand.

Later the real author of the letter came to be known. But then it was too late. The ‘devas’ ( the gods )enraged by the foul murder of the innocent monk had created thunderstorms and caused the river and the sea to swell and flood the entire city of Kelaniya.The king believed this to be a curse upon him and consulted the wise men of his realm. To appease the gods and save the country from the disastrous floods, they advised the king to sacrifice something very near and dear to him. On hearing this his courageous daughter, Devi offered herself for the great sacrifice. So she was placed in a richly furnished boat and sent adrift on the ocean. The winds and currents took her boat safely to Mahagama on the southern coast of Sri Lanka. Learning of her royal connections, King Kavantissa the then ruler of Ruhuna, the southern kingdom made her his queen. She was named ‘Vihara Maha Devi’. It was her son, King Dutugemunu who later became the greatest monarch of Anuradhapura period. During his reign Kelani Vihara became a well known seat of learning where more then five hundred monks dwelt.

During the rest of this period Kelani Vihara seems to have undergone only a few changes. King Voharatissa had a magnificent parasol erected over the ‘dagaba’. King Kanittatissa had an assembly hall built for the monks. From then on, for about 900 years until the beginning of the Polonnaruwa period, the chronicles are silent in respect of this temple.

However a certain stone pillar inscription recently discovered at the Kelani Vihara premises reveals a number of interesting facts, with reference to the temple towards the end of this period. According to that there had been a chandelier with a gem studded base, in the temple premises, and also a troupe of dancers and drummers who performed puja ceremonies regularly.

Read in-depth about the history, Get the latest official updates and Share your knowledge as comments.