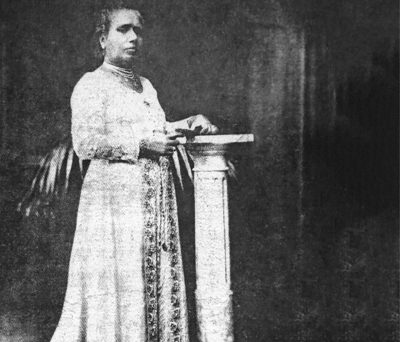 It was at this time that Mrs. Helena Wijewardene of Sedawatte Walawwa visited the temple. With her visit a new chapter in the history of the temple commenced.

She was born a Christian, wealthy and noble. But after her marriage to Don Philip Tudugalle Wijewardene, a Buddhist by birth, she adopted the Buddhist faith herself. So one full moon day in 1880 she visited Kelaniya to worship the temple. When she walked into the Vihara to offer flowers at the Buddha statue, her feet sank in the mud on the then unpaved floor. She felt sad about the dilapidated state of the temple as existed at that time. So, then and there she made up her mind to restore the temple and made it worthy of a place of worship. As the first step of the restoration work, she got the floor of the Vihara paved with uniform rock slabs. One slab with her initials and the year inscribed, as H.D.W – 1888, was laid near the main entrance to mark this event. Later in 1902, she replaced the wooden flower-altar that was in the Viharaya with a better one made of marble.

The work thus begun continued over many years. In 1927 she laid the foundation stone for the complete restoration of the old Vihara. She got down artisans and sculptors from India and employed architects and artists from Sri Lanka. Her son Don Walter Wijewardene gave her all the support and encouragement she needed. A new wing to the old shrine room was added along with a central octagonal roof in the Kandyan style. Murals with a new style of delineation and colour were drawn on the walls of the new chambers. The pillars and the ceilings were executed in the traditional style of ancient sculpture. The doors and doorways were engraved with the Kandyan style of ornamental carvings.

Not content with all that enormous work already done, the far-seeing lady that she was now turned her attention to the question of the future maintenance of the temple. She decided to make lasting arrangements for that too, and made lavish grants for the purpose. A paddy field and a coconut land, measuring 250 acres in extent, were donated and with its annual income a fund called “The Kelaniya Kalawa Trust Fund” were created. In addition to this, another land, called Uyanwatte, situated at Kelanimulla on the other side of the river was also gifted, to be maintained as a flower garden to supply the daily requirement of flowers for the poojas at the temple.

All lovers of Sinhala art and sculpture, therefore, owe a great debt of honour and gratitude to this gracious lady, Mrs. Helena Wijewardena of Sedawatte. Today, on account of her magnanimous work the restored Kelani Vihara, the pride of the nation’s heritage, stands as a living monument to her pious zeal and generous munificence.

Read in-depth about the history, Get the latest official updates and Share your knowledge as comments.